Proudly Serving The Community For Over 125 Years

It was over 125 years ago in 1889 when the people of Abington decided at a town meeting to form a fire company – the first in the township. Three days later, the fire company was founded. The first firehouse was built on Old York Road across from what is now Abington Memorial Hospital. The company’s first truck was a horse drawn cart manufactured by the local blacksmiths of Winder and Lightcap for the price of $125.00. The trucks accessories, including ladders, buckets and axes, were bought for an additional $425.00.

Today the fire company is located on Horace Ave adjacent to the Abington Township Municipal Building and the Police Department. Fire engines that used to cost $400 dollars now cost $500,000.00 but the dedication and pride of our members is as strong as it was in 1889. Below is an except from a Fire Company report written in 1956. It was written prior to the move of the fire station to its current location on Horace Ave.

On February 15, 1889, after frequent disastrous fires, the citizens of Abington Village called a meeting for considering the great necessity of owning and having for immediate use, fire buckets, ladders and truck, and to devise a means to secure the same and to organize the Abington Fire Co. Prices were obtained for all equipment and an order was given to Winder and Lightcap, the village blacksmith in Abington, for the building of the truck at the price of $125.00. After buckets, ladders, axes, extinguishers, lanterns, bell and other accessories were obtained the truck cost the sum of $425.00.

In 1907 a Hose Cart was purchased and was built by Jeff O’Donald of Jenkintown. The Hose Cart, which carried hose nozzles and axes and the ladder truck which served the company until 1914 when the first motor driven apparatus was purchased from the Locomobile Company and built by Boyd Brothers of Philadelphia, at that time fire truck builders, at a cost of approximately $3,500.00. This apparatus had a hose body and a 35 gallon chemical tank and was very modern for that time.

The chemical truck served the company until 1922 when the company purchased a Ahrens Fox 900 gallon pump and hose truck.

In 1928 the Fire Company saw the need in the growing communities for a motor driven ladder truck and purchased a Ahrens Fox City Service Truck at a cost of $10,000.00. At that time it was the only motor driven ladder in the York Road section from Philadelphia to Easton. This truck was rebuilt in 1942.

In 1935 the need arose for a small truck of the booster type and a Dodge truck was purchased and built by Philadelphia Fire Truck Works in Roslyn. This truck had a tank of 200 gallon capacity and hose body for 500 ft. of 2 ½” hose and 500 ft. of 1 ½” hose.

In 1939 the Abington Fire Company celebrated its 50th anniversary with a banquet and entertainment. Ross B. Davis, then chief of the Bureau of Fire in Philadelphia, was the guest speaker and the seven living charter members were in attendance.

Now the Company sees the need of a new ladder truck and have placed an order for 100’ American La France Arial Truck, which they expect to be delivered early in 1957 at a cost of approximately $40,000.00.

The Abington Fire Co. has a fine personnel and owe their success to active members, the Ladies Auxiliary and the people of the community who have contributed to their needs and the appropriation from the Township Commissioners. We feel that the members before us did a wonderful job of building a fire house in 1912 that holds three pieces of modern apparatus without expanding the walls, but we are cramped for room and are looking forward to larger and more modern quarters in the future. 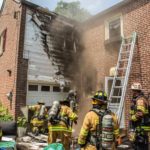 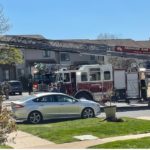